spent the day at Wonderland went on the roller coasters. i'm not as young as i used to be and my stomach finally said "that's enough" by the end of the day. it was all well worth it because i was there with those that i love. 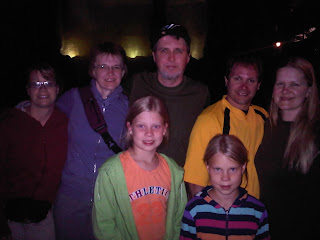 i'm there in the middle, my dear one is next to me on the left, on the far left is our sis-in-law Jenn, on the far right is Jackie and Barry (Wendy's sis and bro-in-law) and then there's Katie and Emmy (our neices). not pictured is Wendy's brother Terry because somebody had to take the pic.

so little Emmy (she's 9) absolutely schooled me on staying power for the roller coasters. she went on 12 trips or so while i stopped after 6. i really hope that i'm not a stick in the mud when Wendy and i return there next week. my breaking point was after The Behemoth where they start you off with a drop that i thought was supposed to stop 10 seconds before it finally did stop (ok, that's an exaggeration). still it scares the snot out of you ... and little Emmy's response? "that was AMAZING, let's go do that again!" wow, uh no, i think i'm done. 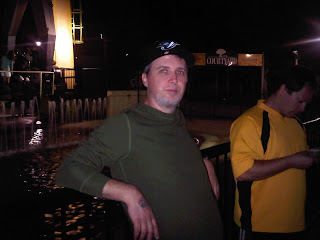 i don't think my goatee looks as scraggly as theses pics seem to make it look, but there ya go.
Posted by shallowfrozenwater at 9:39 AM