i stole this idea from Donald Miller.

i've decided to let someone else write my blog today. she's a member of the family. she's my dog. here ya go. 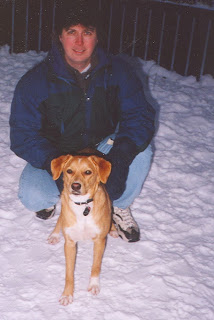 hello there. you don't know me, my name is Maddie and i'm a member of the family along with the food guy and the lounge in the back yard girl. i call them that because it's the guy that i love who always feeds me and it's the girl that i love that goes into the back yard with me and let's me relax on the cool grass with her on a regular basis. they're pretty cool, for people. i especially like to smell them. actually i sneak up on them and smell them, i don't think the girl likes that very much but i still know she loves me.

i'm told that i'm named after an author, someone named Madeleine L'Engle but i don't know who that is. what i do know is that when there's a certain lilt in either of my people's voices that means that there's some food ready for me or we're going for a stroll or we're going to hang out in the back yard for awhile. when they're relaxing in the basement i come up on the guy and i put my head on his chest while he lays on the couch. that's my way of saying, "is it suppertime YET? seems like FOREVER since i last ate". i'm actually really good at telling time. seriously, they feed me at the same time every day and i'm regularly there reminding the food guy what time it is whenever it gets close to suppertime.

i was born in March of 2000. my people didn't know exactly what day it was so they just picked a day. they picked St. Patrick's Day actually so that means we celebrate my birthday at the same time as that little holiday. no green beer for me though, i've never touched the stuff.

i was actually at someone else's place before i came to where i've been since. i was young but i remember chewing on a cell phone (which was delicious by the way) and next thing i know i was at some restaurant and my girl was there looking at me. i heard her asking my boy if i wanted to rescue a dog before it got sent to the pound (whatever that is) and the boy sure seemed ecstatic to see me. i remember the boy and i went for a walk and i didn't feel like walking with this guy so i just sat down in the middle of the sidewalk, refusing to move. my boy looked at me with the love that i've come to get used to by now and he just scooped me up under his arm and walked me back to see my girl. i guess he liked me because they put me in their car and took me to what i now call home.

it was hard to get used to being there at first. i really missed my mom and they wouldn't let me sleep anywhere i chose or do my business wherever i wanted. i figured it out though, they set a great spot for me to sleep and they provided this cool little dog run for me to do what i needed to do in private. the first few nights were hard but they put a hot water bottle wrapped up in some of my boy's clothes so that i had something warm to cuddle up to that smelled like my people. that was very cool of them, it was one of the first times that i figured out that they really did love me.

i've had some dog friends over the years. there was Emma and Blue ... i haven't seen them in years actually; there was Waggles and Sassy ... it's been a long time since i've seen them too, and right now my best friend is Tessa. Tessa lives next door with her girl. Tessa's girl is especially nice to me and i like her a lot too. Tessa and i play in my back yard. we run together and wrestle, we chase the ball and i try to steal it from her or she tries to steal it from me. Tessa's bigger than me but i'm wiry and quick so if i get cornered i just give her the old head fake or i just jump right over top of her. it's not bad for a 10 year old if i do say so myself. i like running and playing. i have a lot of fun in soft snow, particularly if its a full snowbank that i can jump around in. i like just about any dog and any of their people that i come across.

in the mornings my guy comes downstairs and makes his lunch for wherever he goes off to everyday, but he also feeds me my breakfast and then after he's done all his stuff ... we get to go for a WALK! i just love this time of day. i get to go out and sniff everything in the world as we wander around the neighbourhood. i don't like it when we head toward the busy street and i especially haven't liked the couple times my guy has left me tied up outside the bakery while he went to get some bread. the smells were wonderful but the anxiety of wondering if i'd be alone forever was too much to bear. thankfully my guy returned for me and he smelled like the bakery as he carried a bag full of great smelling stuff too. i do get excited about walks though. i pull too hard on the leash as i can't wait to smell what the next tree will have around it. i especially like it when BOTH my girl and guy go for walks with me. i like to walk between them and laugh as we have the best time. another favourite activity is when my people come home at the same time because that means that we're likely to all hang out together after that. it usually happens on Sundays when we have our morning routine and then they go out for a couple of hours. right around noon they both return and it's exciting to see them. we have this door with a window about at the height of my people's heads and when they come home together i like to jump in the air so that i can look through the window and see them in the doorway. they often tell me that they like to see that and they seem pretty pleased with me in those times.

i'm a really good watchdog. this one time someone broke the glass in the front door and was about to reach into the house when i decided to let them know that i was there. all i did was bark but they sure got out of there fast. that was a good feeling because i knew i was contributing and i was earning my keep. there was another incident where someone came into the backyard and stole my guy's bike. i was barking but it was too late, the bike was gone and i couldn't get through the patio door to get at these guys. i think my guy was sad at losing his bike but he gave me a scritch between the ears anyway (i like it when he does that). when he scritches my ears i like to work my leg to pretend that i'm actually doing the scritching myself. my guy likes watching me pretend to scritch while he does the scritching.

i'm gonna tell you a secret. i like to behave like a cat. it freaks my guy out and it gets me a little extra attention from him. i stretch like a cat, i rub up against them or a table like a cat would do. sometimes my guy just stares at me and says something like "i'm not a cat person, so we have to change that behaviour", he never has though. i'm also afraid of loud noises (like a cat would be) like arguments, thunderstorms, garbage trucks, buses and i don't like it when my guy carries around the broom or the vacuum cleaner. i'm sure i'll be fine and whenever i've asked for some comforting then someone has stepped forward to help me. i've even gone so far as to try to sneak into their bedroom during a thunderstorm; i just don't want to be alone. usually my guy comes downstairs with me and he sleeps on the couch while i try to stay close to him. i like that about him.

well, it's hard to type when you don't have digits to put along home row so i suppose i should stop. i just wanted to tell you folks a bit about my life. i love my people and they love me. they say that i'm therapeutic for them but i just think that we're a family.
Posted by shallowfrozenwater at 12:05 PM

It looks like your guy taught you how to write pretty well, Maddie.

But I think he also taught you that sentences don't need to start with capital letters. (Maybe there is something wrong with the shift key on the keyboard.) Oh well, it could be worse.

It sounds like you have a pretty good life, and you live with some great people. And you can tell them I said so, too.

hi Al, ian here. if the lack of capitals is good enough for e.e. cummings then it's good enough for me.
that and i'm just pretty laid back (or lazy depending on who you're talking to). i guess part of me really does believe "it's a dog's life".