i have some "issues" with the CSI franchise

CSI is running a trilogy this week, and i've been watching. they've been involving characters from all 3 series in order to tell an ongoing story. the main character so far has been Dr. Ray Langston played by the wonderful Laurence Fishburne. i've been watching and enjoying, if i ignore those things that i don't like about the franchise.

1) everyone is gorgeous and brilliant - i have NEVER seen a work environment where everyone could be a runway model and yet they're portrayed as the most brilliant of geeks who would've had to spend their first 25 years surrounded by testtubes and bunson burners. seriously, how am i to believe that Natalia Boa Vista is supposed to be a scientist? you mean she gets to be brilliant AND she stops traffic just by walking around outside?

i suppose i could understand if there was ONE pretty scientist in the franchise but they are ALL pretty scientists. even the dudes are pretty. the only normal looking folks on any of the shows appear to be the Lieutenant types in Las Vegas and Miami. i say that because Flack in New York is also a pretty boy. i've NEVER seen a work environment even close to any of these work environments. i mean, i've fairly average looking but i might be the among the best looking folks in just about any work environment i've been a part of, and that says nothing of the level of brilliance that is around me in any of the plethora of jobs i've had.

2) Horatio Caine is the new James T. Kirk - remember all the jokes that used to be made about how mono-syllabic William Shatner was as he played Jim Kirk on Star Trek? Horatio is just plain smarmy. how do writers get away with these one-liners as he puts on his sunglasses and says, "that's not a threat, that's a guarantee" (cue the screaming music). 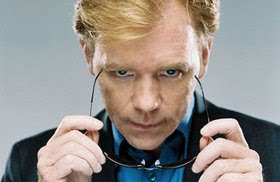 3) this is beneath you Gary Sinise - Sinise has got mad acting skills. he was Christoper Walken-bad-guy good in Ransom if you've ever seen that. he had a very interesting cameo as the Marshal in The Quick and the Dead; i thought he stole the show in Apollo 13 and of course he was phenomenal as Lt Dan in Forrest Gump. it's a shame that CSI: NY may be what he is recognized for at the end of the day.

4) Laurence Fishburne is no slouch either - when i think of Fishburne i think the Matrix flicks, where he was amazing. he's also done Shakespeare on film where me played Othello. he played an excellent Sheriff alongside Sean Connery in Just Cause which i really enjoyed and he had a bit part in one of the most underrated movies of all time, Searching for Bobby Fischer.

5) they've gotten rid of some of their best characters - Warrick Brown may've been their most human character. he had a gambling problem, he made very human mistakes, he had a son he hadn't known about and he knocked heads with many in authority. and they killed him off. incidentally, that dude was gorgeous too. Gil Grissom wasn't gorgeous and his quirkiness added to the franchise much more than any other character in all 3 series.

6) they seem to be showing a lot more violence ast the seasons go on - my wife and i agree on this point. i've always been a bit queezy when they do the medical closeups of bones snapping or bullets ripping through flesh or something and there are regular times that i just avert the eyes. i guess i'm saying that just because you have a cool technology doesnt mean that you have to show it for all the world to watch.

so ... this doesn't affect the fact that i keep watching all 3 shows, because i do. i'm a bit bummed at losing Warrick, Grissom, Delko and even Tim "Speed" Speedle but i'm still watching. i've enjoyed this trilogy as Dr Ray (Fishburne) has been the main focus trekking through Miami, New York and finally returning home to Las Vegas tonight. in general i like the franchise, i have my issues but i still watch and enjoy. i hope you do too.

Good post! My wife and I used to love CSI (the original), but then we started watching other shows during the same time frame, and went away. But I agree with you assessments, and I have never been able to watch Horatio.

I've never been able to make it through even one episode of CSI, it's just too much for me.