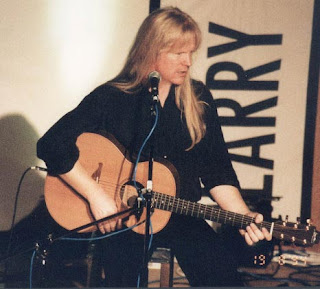 he's been gone over a year now but i want to throw this down because i continue to miss the man. there have been a handful of folks that have affected me significantly over my formative years and beyond but Larry is definitely a "significant" guy from my history. i think that maybe i got a bit of indignance with how the poor are treated in this world from guys like Larry Norman. i'm probably more political in protecting the poor because of guys like Larry Norman. i probably vote on the left because i see that a society is judged by how it treats its poor.
i had a period where i was a long-hair and i probably did so out of a desire to rebel from the staid approach of the church. i know i wanted to shake it up a bit and i still do. i'm a social worker (a welfare worker) because i saw how much the poor needed so much help and there were so many barriers in their way that unless men and women of good intention stepped up then little would be done. i don't see the church doing nearly enough about this and i still think that much of the church (almost any church i've taken even a cursory look at) has way too much of an exclusivity and an inner myopia that only gets them concerned with issues that don't go any broader than the steps of their own buildings.
Larry Norman fought that. "Why should the Devil have all the good music?" smacked up against all sorts of Christian perceptions about what it meant to be a Christian in a world that needed and continues to need relevant Christians.
"Shot Down" is a song that has always spoken to me simply because its mostly about how other Christians had treated him. essentially there are well intentioned folks who think they're being adamant about protecting God's holiness when it turns out their busy protecting the cultural trappings that we've built up around the church. i've never understood the desire to tear a man down because they believe that he's singing to a beat that they don't prefer.
be more inclusive my friends.
i want to leave you today with the lyrics of one tune that could very well speak to the heart of Larry Norman's message.

IF GOD IS MY FATHER

If God is my Father and you are my brother. Then why can't we bother to reach out and love one another?
Why do we keep on acting the way we do? The way we treat each other it just breaks my heart in two.
Once we were happy, oh, yes, once in the garden.
But then a lie broke the stillness, and our hearts began to harden.
And hoping to be wiser, man has reached too far.
Sometimes I think that we've advanced, but then I look at where we are.

i miss you Larry and i still have my mp3 player loaded with like 60% of your tunes. i love you my brother.
Posted by shallowfrozenwater at 12:20 PM