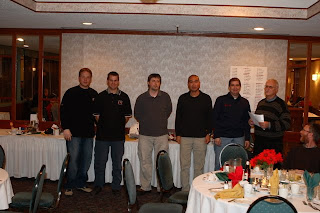 that's me, 3rd from the left, and i'm receiving an award from my football official's association a couple years back. i was a medalist at one of the linesman positions.


i recently started acting as the referee for football games. i've been a linesman and an umpire in the past but i had never been the referee prior to last week.
my first experience went poorly. my timing was wrong, my signalling was wrong, i was out of position and well, it just didn't go well.
i had a series of discussions with an evaluator and i managed to express my desire to have some discussion about how to do this job properly. in the end it was suggested that i contact some of our veteran refs in the association and see if they'd be willing to sit down to a chat while watching a game. i soon fired off emails to Dale, Adam and Jim and within some small amount of time i had made arrangements to meet both Dale and Adam to sit with me and answer my questions (Jim was willing too but he's out of town right now). none of these guys has any real obligation to do any of this with me and yet they were enthusiastic in their support for me. the responses were peppered with words like, "don't worry Ian, i got your back", "we'll figure this out and it'll all be good", "it's going to be fine, i'll be there at 5".

EVERYONE is in a search for community, a search to belong. these men are willing to take part in relationship with someone who needs their help simply because ... we belong. special interest groups of all kinds like to call themselves "communities" and in some sense they are, but the analogy falls apart if there's no depth to the relationship.
is community more than "being there" for someone in need? yes it is. it's nice to have these guys supporting me through a frustrating situation but the depth of relationship still isn't there. i'm not planning on discussing a person's inner desire for God, we won't be discussing ways to combat sin in our lives, we probably won't even discuss budgeting problems in a typical household. we're meeting for a particular purpose within our own little special interest group.
don't try to tell me that being neighbourly, friendly or supportive is being community. you need to go deeper to get my attention in that area. now if our discussion goes to deeper things other than the importance of recognizing Intentional Grounding versus an Incomplete Pass then that's a bonus and i'm on my way toward changing my mind.

this is just an analogy and analogies break down, they fall short. isn't that the point though? we use analogy, metaphor and parable to point our way to God. if i had started this post like Jesus started his parables, "The Kingdom of God is like a referee when he embarrasses himself in public ..." would you have kept reading? actually, you probably would've because few can resist the embarrassing moments when they're happening to somebody else. the point of the parable is this though, you have to go deep if you want deep relationship.

so ... The Kingdom of God is like a referee who gets nothing right over the course of a 3 hour game. He searches the rule book for ways to understand how to do the job and he calls his compatriots for help to understand where it is that he went wrong.

i'm grateful for the support but i think it's just because i want to avoid looking like an idiot again. i know that there are neighbours who come alongside to assist in carrying the load.
i don't think i'm talking about football anymore.
Posted by shallowfrozenwater at 9:53 AM

just got home from my 2nd attempt at reffing and it went VERY well. still some hiccups to work on but a definite improvement.

thanks Shane, and thanks for coming by.