i got an award! 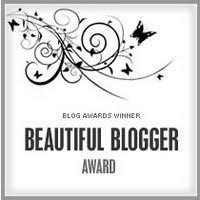 wow, i've been nominated for an award ... by a person that i didn't even know was reading my blog. i've been reading Dana's blog Of Wool and Water for probably a couple months after she was linked to by another of my fave blogs.

i've got to say that she really inspires me pretty regularly and well ... she's just a cutie.

Here are the rules:

•Be polite, say thank you to the blogger that gave this to you & give 'em a linkback.

•Pass it on to about fifteen other beautiful bloggers that you've recently discovered.

•Say seven things about yourself.

My favorites right now include:

Dana at Of Wool and Water beautiful and sweet on a daily basis. thank you Dana.
Al at Al's Musings sometimes pushes my buttons but also sometimes i'm a jerk who needs his boundaries pushed out.
Everett at A Guide to a Satisfying Life is a guy i'd love to meet in real life. there's only an entire continent separating us geographically, that's not too far is it?
Down Goes Brown is a Toronto Maple Leafs hockey blog. the language can be a bit "adult" sometimes, be forewarned.
Abraham at Downhill Both Ways writes beautifully of everyday happenings. very cool.
The Thinklings have a nice mix of cultural savvy, theological knowledge and rubber to asphalt approach that i like.
Mike Todd at Waving or Drowning has inpired me on several levels for close to a year now.
i'm still getting to know Matt at The Church of No people but so far i'm liking the experience.
Jesus or Squirrel , now that place can push your boundaries sometimes
The Fellowship of the Travelling Smarty Pants is a blog written by several contributors and it's pretty ingenious sometimes.
tyler stanton is hilarious

and now, more than 7 things about myself:

i love Wendy and she loves me.
i'm the biggest hockey and baseball fan you know. it gets me in some trouble on those days when i pay WAY too much attention to such things.
i officiate baseball and football although i never really played either game except recreationally after the age of 12.
my dog's name is Maddie and we named her after my wife's favourite author Madeline L'Engle. the dog seems to behave like a cat and i have no idea how she got those habits.
i'm learning the guitar and i have a couple tunes that i LOVE to play. it inspires me.
i bike to work as soon as the snow and ice leaves the road, until then i'm on the bus so that i can work on being green.
we moved to Winnipeg the same summer that the NHL hockey team left town. i fought the move at every turn and now that i'm buried in our church community (the only real reason we moved here) i can't think of living anywhere else. i still want NHL hockey to come back to town though.
i'm a welfare worker and feel really fulfilled in that job, it's a nice niche for me.
i haven't been sleeping well lately. stress.
i've known some dark days but i was loved back into the light.
i love Christmas.
i say some REALLY stupid things sometimes.
powerful influences over my lifetime include: Jesus, Mom and Dad, Wendy, Mrs. Cathcart (my Sunday School teacher as a child), Glenn Shantz (former employer), Larry Norman, Bob Dylan, Mark Heard, Steve Taylor, Bruce Cockburn, JRR Tolkien, CS Lewis, and Wendall Clark (favourite Toronto Maple Leaf), Hitchhiker's Guide to the Galaxy, Terry Pratchett and Monty Python.
Posted by shallowfrozenwater at 12:04 PM

woo hoo! thanks for the love. maybe one day you will visit Atlanta (we have baseball and hockey...) and we can meet. i'll even introduce you to Tyler Stanton!

Sorry for the button pushing, not sorry for stretching your boundaries--but you are also stretching mine, and I need that!

Looking forward to chatting in person, and enjoying some of Victoria's fine coffee together!

i want to be clear, i didn't at all mind getting my buttons pushed, in fact i really appreciated it. we need to stretch our muscles all the time and you made me want to express myself better.
i too am looking forward to coffee when i'm in town. i'll have to get wherever we're going by bus but i'll get there. i'm also hoping to have borrowed and have a good start on New Kind of Christianity by the time we sit down to chat.

Everett, actually some friends just went down to Georgia for a couple weeks and last month i SERIOUSLY considered hitching a ride with them. i wanted to see the community they were going to visit but i also wanted to contact you and see if we could sit down. that didn't work out but there's a chance it does in the future (well, ok it's a very remote chance but a guy can dream).