Respect in Sport ... or the opposite 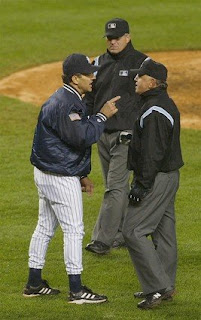 last night i very nearly lost some sanctification all over a couple coaches as their team lost a playoff game to end their season. they were naturally pretty upset over losing but nevertheless they were a good deal less respectful than they should've been in the situation. every coach and every umpire in the league is required to take the Respect in Sport course through Sport Manitoba, i just sometimes think that maybe i was the only one who actually paid attention during it.
i had a 2 whackers (that would be umpire lingo for a really close play) at 1b and a stolen base attempt on a pitchout that all went against the losing team. when one of the whackers scored the winning run one of the coach leatherlungs was busy bellowing about how i should get an assist on that run. later at the end of the inning the other coach ran clear across the field in an obvious attempt to discredit/embarrass/disrespect me with his opinion of my call on the stolen base. in both situations i just told the coaches that was "ENOUGH!" and i not so gently told them to go sit down but i could've just as easily told them to leave the park. it's a playoff game though, who wants to end someone's season like that? not me. unfortunately, i've dwelt on this for far too long now that i'm thinking that the right move would've just to turf'em and sleep a little better.
the smugness of the coaches after the game was unbelievable. imagine ... they MUST'VE had a much better view from 120 feet than i did from 7 feet.
i wonder why it was that i had a spiritual song running through my head after the game? y'know what? i slept pretty well anyway.
Posted by shallowfrozenwater at 10:44 AM

I coached 3 games of minor hockey when I was younger but quickly decided that the grief was not worth the $20 I was earning for the 2 hours of work.

It's a thankless job being a ref/ump of a sport.