just got home from reffing my first football game 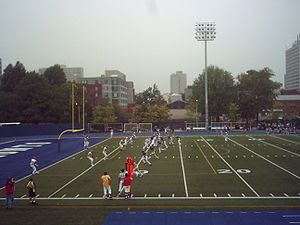 in case you're wondering, that isn't me.
i've actually been a football official for about 5 years now but tonight was the first official night as the "ref". in case you're reading this and you happen to live outside of North America, i'm talking about Canadian football, which is different in rules than even American football which you've probably heard about. anywho, i've always been a supporting character but this time i was the MAN.
it wasn't pretty.
nobody really tells you how to do the job but there's a lot expected. at the end of each half there was an evaluator present who ... tells you all the stuff i got wrong. it's annoying but at the same time, i learned a lot.
i knew going in that i'd be asking a lot of questions from the Umpire during the course of the game. he's been officiating for like 40 years (no exaggeration) and i don't think he took me very seriously when i told him that i'd really rely on him a lot over the course of the game. it was actually a bit humourous as i checked with him at every turn, "now i make that signal like this, right?" or "uh, how do you signal that again?" or sometimes, "look i don't have a clue what the options are here so how about you explain them to me before i try and explain them to the captain". he was very patient and it's a good thing because he could really hang me out to dry over the course of a 2 1/2 hour game.
well, i'm learning ... and it's good to be involved. i expect i'll improve but it was actually a bit humourous watching the evaluator bite his tongue instead of telling me just how abysmal that was. maybe it'll affect how we train guys to do this sort of thing in the future, i'm not sure the "sink or swim" approach is working.

oh yeah, and i COMPLETELY wiped out on the goal line as i tried to stop and call a touchdown. it took 10 minutes of scrubbing to get the grass stains out of my pants.

In all my son's sports over the years I have been very respectful of refs, umps and judges. Why?? Because the only the worse would be if I had to do their job. Eeek. That would be scary. I admire any man or woman who is willing to officiate any sport event. Hats off to you man.

You are a much braver man than I. I reffed hockey a few times when I was much younger and will hopefully never have to do that again. Too much abuse!

i wonder if i didn't hear any stuff from fans or coaches because i was too busy trying to stay on top of other stuff or people just realized how much i was struggling and they decided not to question a man while he was down.
i find that it gets me out of my natural anxiety mode and moving to a healthier space.